This report is the outcome of a joint research project, undertaken by Women’s Health West and the University of Melbourne.

Women’s Health West initiated this piece of research in response to feedback from Muslim women in the West, who said they were experiencing difficulty securing employment, despite having high level, locally attained qualifications.

Women’s Health West and the University of Melbourne reviewed the current research regarding employment barriers for Muslim women and consulted with community women to learn more about their experiences as jobseekers. During these consultations, women described common barriers, including racial, religious and gender discrimination in both the employment market and in the workplace. The report also recommends strategies for employers and community sector agencies to redress these barriers to employment and to support Muslim women who are seeking work. 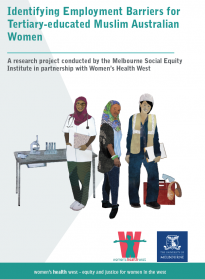