Female genital mutilation or traditional cutting (FGM/C) affects an estimated 100 to 140 million women and girls worldwide.¹ Every year approximately two million girls undergo the procedure, which is internationally recognised as a gender-based health and human rights violation.² FGM/C is predominantly practiced in Sub-Saharan Africa, Middle Eastern countries and in some parts of Malaysia, Indonesia, India and Pakistan.³ Women and girls are increasingly migrating to Australia from countries where FGM/C is widely practiced, so we need to develop timely and culturally appropriate healthcare, support and community education. Specific communities affected by FGM/C are increasing in Melbourne’s western region.

This tool has been designed for practitioners, midwives and other health professionals that work with women and families from communities who practice FGM/C. Early intervention during prenatal care, birth and the early years of childhood development can prevent FGM/C. Health practitioners can support parents to abandon the practice by working with families from affected communities to provide education, information and referral. 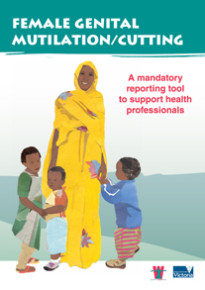